Black Belt! It’s what everyone dreams of when they envision themselves or their children joining the martial arts.  But what is a black belt, really?

What a Black Belt Isn’t

To understand what a black belt is, it’s easier to start by understanding what it isn’t.  There are a lot of stories, explanations, and exaggerations about the black belt, and most of them are simply false.  Here are a few of my favorites:

There are stories of the “old days” when students were given a white belt, and over years of training the belt grew darker from dirt and blood, until one day it was black.

FALSE: The use of “black belts” didn’t occur until the 1880s when Jigoro Kano, the founder of Judo, awarded the first black belt to his students to signify their level of learning.  It wasn’t until the early 1900s that he also started using colored belts to further divide the levels of students.  This is where our modern day belt ranking system come from.  A hundred and thirty years, give or take a few, is hardly an ancient tradition.

Black Belts Have Mastered Their Art

Nothing could be further from the truth.  In almost every martial art that uses belts for ranking, black belt signifies competence in the art’s basics.  It is the “high school diploma” of a martial art.  Most martial arts systems have up to nine levels, or degrees of black belts that can be earned.  It is not until the later degrees that a student is considered a master.

All Black Belts Are Created Equal

Every school is different, and so is every school’s criteria for black belt.  Some schools will promise you or your child will earn a black belt in three years (avoid these schools) and some brag that it takes more than ten years to earn one of their black belts.

Some schools have very short tests of only the most recently learned materials. Other schools, like ours, require students to demonstrate everything they have learned up until that point.

Some school also have different black belts (junior blackbelts) for children than they do for adults.  That’s what we do.  More about that in a bit.

This all depends on the type of martial art.  If, like most Taekwondo schools today, a school’s sole focus is on sparring for points, then there will be nothing remotely deadly about them.  On the other hand, if a school focuses on close quarters and weapon based combat, a student can become quite “deadly” very quickly.

What IS a Black Belt?

Put very simply, a black belt is a rank in a martial arts school, as determined by the school, or organization that it operates under.  It is nothing more than a piece of cloth that signifies that a student has learned XYZ.

More importantly, a black belt is a symbol of a goal for students to strive for.  It is a prize for them to keep their eye on.

What is a Kung Fu 4 Kids Black Belt? 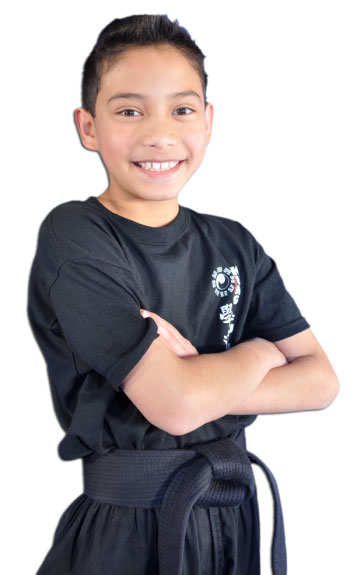 Now that we know that every black belt at every school is different, what then is a Kung Fu 4 Kids black belt?

First let’s look at one of the things that makes our school a little different, even if only from a visual perspective.  The children (6th grade and under) in our school wear belts.  The teens and adults wear sashes.  Now I’m sure your wondering, what is the difference between a belt and a sash?  The simplest answer is the material they are made of.  While there are some training related reasons that a sash is worn, it is a ranking system just like the belts, but different enough to distinguish between the two.

In our school a Black Sash is considered the completion of the basics.  This curriculum is very detailed and difficult to learn, and is simply not a good fit for kids. That is why we developed the Kung Fu 4 Kids curriculum.

How Long Does it Take to Earn a Kung Fu 4 Kids Black Belt?

The advice I have given hundreds of time is that if a school ever tells you how long it will take you, or your child to earn a black belt, walk away!  There is simply no way to tell, unless the school is designed around pumping out black belts.  We refer to these a “belt factories”.  Their sole goal is to keep their students advancing in rank, earned or not, so that they feel accomplished and keep paying their dues.

I have seen kids earn a black belt at our school in just over two years (very rare) and some that took six or seven years.  How quickly a student can earn their black belt depends on lots of factors such as natural talent and ability, regularity of attendance, and the amount of practice done at home.

While earning belts is a great goal, and an even better way of teaching children about setting and meeting goals, earning belts should never truly be THE goal.  There is a popular saying among quality martial arts schools….

We train for the art, not for the belt. It is the journey that is important, not the destination.

Get Your FREE Report!

CHECK OUT OUR SCHEDULE
& INTRODUCTORY SPECIAL